Written by Sarah Obuchowski on December 9, 2020 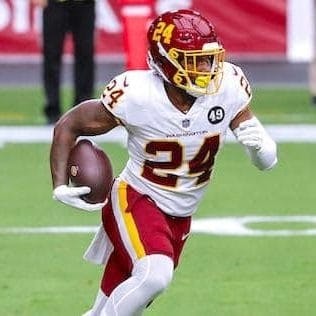 The Washington Football Team put on an impressive display this week, making a statement in the league with their victory over the undefeated Steelers. What was even more impressive, however, was that they were able to do so without their rookie running back, Antonio Gibson, who has had a great start to his NFL career. Gibson suffered a toe injury during an early carry in the game and did not return to play. Reports confirmed Gibson sustained “turf toe”, an injury to the ligaments of the toe joint caused by hyperextension of the big toe during push off. This injury got its name because of its increase in frequency as artificial turf became more popular and preferable to typical grass fields, and it is very common in the NFL.  (Davante Adams suffered the same injury in the 2019 season).  Turf toe can develop gradually or result from a sudden injury, and symptoms include limited toe range of motion, joint swelling, and pain. The ligaments are essential for weight transfer on your foot, allowing you to propel yourself forward during walking, running, and jumping. The severity of the ligament sprains dictates a person’s activity levels, and a complete rupture often requires surgical correction.

Details have not been released on the severity of Gibson’s injury. It is likely he sustained a Grade I or II injury, meaning mild to moderate ligament damage, and does not require surgery. Gibson’s PT team will be working closely with him to monitor his symptoms and help him return to play without reaggravating his symptoms. Gibson will likely have high pain levels immediately after injury, and he will follow POLICE guidelines (Protect, Optimal Loading, Ice, Compression, and Elevation) to help decrease those pain levels. Symptoms can easily be re-aggravated so great care will be taken to offload Gibson’s foot with proper footwear; more flexible shoes put more stress on the ligaments vs rigid shoes that do not allow for as much movement at the toe joint. Higher level exercises will be held to allow for the injury to heal and to protect the joint, and ice, compression, and elevation will help with inflammation and pain control. After symptoms improve, Gibson will work with his PT team to improve toe joint range of motion. If the joint itself is stiff, it has to sustain greater stress as there is less range for a force to disperse through, and correcting that limitation will help prevent re-injury. Lower leg and foot muscle strengthening will also help offload the toe joint. Gibson may return to play in as little as a week, while still participating in rehab to manage any flare-ups and continue with injury prevention. The Football Team isn’t out of the running for clinching their division so they could certainly use Gibson sooner than later in their final push to make their first playoff appearance since 2015.