Written by Sarah Obuchowski on November 12, 2020 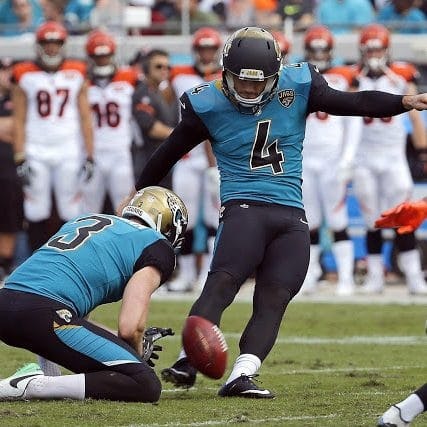 Josh Lambo has always been a reliable choice for Fantasy Football players. Rated as one of the best kickers prior to the 2020, Lambo was anticipated to have another productive season on the Jags. However, after being activated off the IR, Lambo re-aggravated a hip injury that will sideline him for the rest of the season. This injury came late during the Jags vs Texans when Lambo took an onside kick and was more severe than the initial hip injury from earlier in the season. Reports indicate that Lambo injured his left gluteus medius (glute med) muscle, and as a kicker, this injury is particularly debilitating. The glute med muscle is essential for single leg activities as one of its main functions is to maintain a level pelvis, and damage to this muscle makes activities like running and climbing stairs very difficult. Injury to this muscle leads to outer hip pain and also increases risk for general lower extremity injury, as studies have shown that poor control and strength of this muscle predisposes people to sustain knee and ankle injuries. It makes sense that someone whose position depends on having stability and power on one leg would be unable to finish out the season if the injury was severe enough.

Though the specifics have not been reported on Lambo’s injury, the fact that he is reportedly out for the season indicates he sustained more than just a minor strain. Whether the tendon or the muscle itself has the injury, treatment will look very similar, and Lambo will work very closely with his rehab team to help him prepare for next season. If Lambo suffered what is called a Grade 2 muscle strain or sprain, in which fibers of the muscle or tendon are significantly damaged but there is not a complete rupture, he can undergo conservative treatment with physical therapy to allow the affected structures to heal. As the healing process progresses, his PT team will design a program to allow him to gradually load the muscle and tendon to prevent both atrophy and overuse, as both of those outcomes can delay his recovery even more. Early phases will focus on pain management and simple activation and control of the glute med, but as time goes on, increased focus will be on single leg activity. When Lambo kicks during a game, he drives his right leg forward to kick the football, and he relies a TON on that planted left leg to provide power and stability when his right foot leaves the ground. Treatment sessions will thus put emphasis on a variety of balance exercises to ensure that when Lambo returns in 2021, he will have the stability necessary for those 55 yarders. Even if the injury is more severe and there is a full-thickness muscle or tendon rupture, Lambo will still participate in PT after he undergoes surgery, though the recovery process will be longer. These types of injuries tend to be very nagging so his PTs will teach Lambo strategies to prevent injury recurrence. With the Jags record this year, they could really use a reliable kicker and are going to have to try their luck with someone else (and if you still have Lambo on your roster, you better try your luck elsewhere, too).