Written by Sarah Obuchowski on September 16, 2021 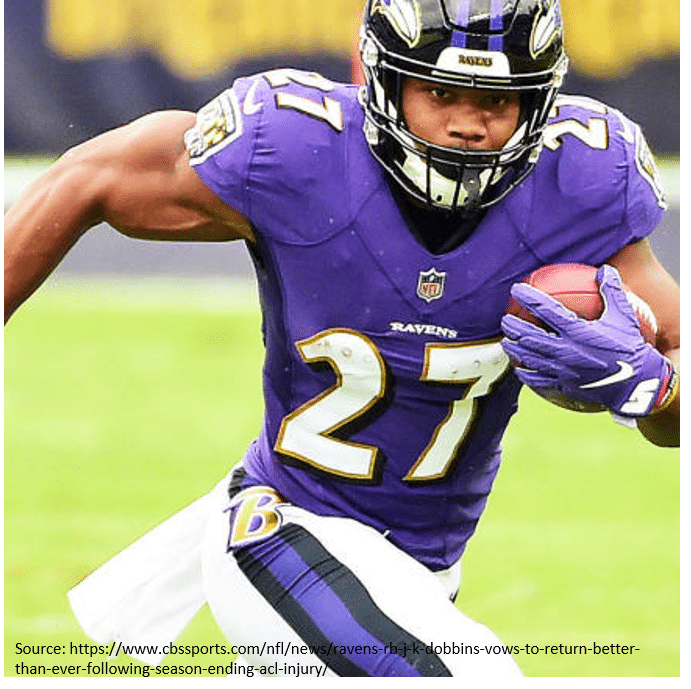 Although several teams have lost players to injury during the pre-season, the Baltimore Ravens have been bitten pretty significantly by the injury bug, just days before the regular season kicked off.  J.K. Dobbins, Gus Edwards, and Marcus Peters all sustained the same season-ending knee injury during practice –  the dreaded ACL tear – leaving the Ravens organization scrambling to fill the running back position.

ACL tears are very common among football players, resulting from rotational stresses, sudden changes of direction, and/or poor landing mechanics, and the recovery requires surgery and months of physical therapy. The ACL, or anterior cruciate ligament, is a key stabilizing structure in the knee that limits the forward movement of the tibia on the femur, and without the ACL, it is much more difficult for the surrounding structures to maintain knee stability, especially in weight bearing. NFL players are elite athletes that have to be able to withstand crazy physical stresses on the body, meaning knee stability is essential to perform well and avoid further injury, and for this reason, most NFL players opt to get ACL reconstruction surgery. This surgery, however, takes months to recover from (and a lot of rehab), meaning the Ravens will have to make do without these three players.

During the ACL reconstruction surgery, tissue is taken from the tendon of the quadriceps, hamstrings, or patella and anchored to the tibia and femur, providing similar stability as the original ACL. However, it takes up to two years for the new “ligament”, or graft, to fully resemble a normal ACL. Physical therapy starts just days after surgery. The first few weeks of rehab will focus on improving pain levels, decreasing swelling, and recovering range of motion and quad muscle strength, and around the 3-month mark, a person can finally be cleared to run. Strengthening of the quad, glutes, and hamstrings will be prioritized during sessions to improve lower body control and eliminate any muscle imbalances that may have contributed to the initial injury. The later phases of rehab will focus on proper technique with cutting, pivoting, and single-leg activities, with an emphasis on proper landing mechanics and dynamic balance. Protection of the graft is the biggest priority throughout rehab, as well as decreasing the risk of re-injury, which unfortunately can be common after the initial injury.

Though NFL players are outstanding athletes, recovery after ACL reconstruction will take at least 6 months because the healing and remodeling of the graft will follow that 2-year timeline despite any strengthening or balance training efforts. Therefore, if the Ravens players have no complications post-op, they will likely be ready to participate on a limited basis in OTAs and camp in anticipation of the 2022 season. Oftentimes, ACL tears are accompanied by damage to other structures in the knee that may not be reported, and if this is the case, recovery will be prolonged. Whether these players are back in 6 or even 10 months, it is clear that the 2021 season is finished for them, and they will spend the rest of the year with their PT team preparing for their comeback season. In the meantime, the Ravens will have to do their best to put these injuries behind them in their pursuit of the elusive Lombardi trophy. From the looks of Week 1, they’re off to a great start.

After ACL reconstruction surgery, Physical Therapy is essential to helping regain strength, mobility, flexibility and flexion for everyone.