Written by Sarah Obuchowski on October 20, 2021 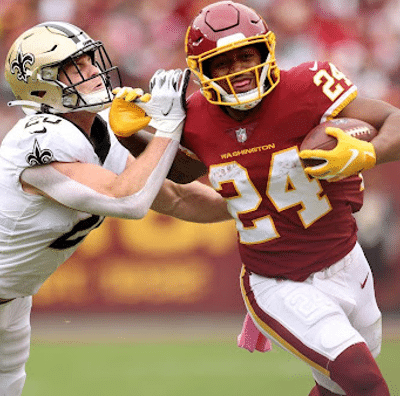 At a Glance –
Player:  Antonio Gibson
Position: Running back
Team: The Washington Football Team
Injury: Stress fracture in shin
Projected Recovery Time: 6-8 weeks, though may be able to return at 2-4 weeks

The Washington Football Team has seen its fair share of injuries so far this season, and during this week, one of their biggest playmakers (not to mention, a staple to several Fantasy rosters) made an early exit from the game against the Chiefs. Antonio Gibson, a standout in his sophomore year in the NFL, has been dealing with a stress fracture to his shin for the past several weeks, and though he has been able to manage the stress fracture with limited reps during practice, he suffered worsening pain in his leg during the game that sidelined him after only 10 carries. Gibson has recently undergone an MRI, and though reports have not yet been released about his current status, it is likely he may miss some time. Stress fractures are overuse injuries, often resulting from repetitive forces to bones, and often require prolonged rest from higher level activities to heal.

A stress fracture is a small crack typically occurring in a weight bearing bone, and this injury doesn’t simply develop overnight. Sudden increases in physical activity and inadequate training are often the culprits that cause a stress fracture, and this type of injury is often seen in runners and athletes in high-impact sports. As a running back, Gibson is exposed to plenty of activities that involve impact, and he likely did too much too quickly at the start of the season. When bone is overloaded too quickly with activity, the body breaks down older bone faster than it is able to replace it, leading to small fractures in the areas most affected by the impact. If left unaddressed, this injury can even progress to a full fracture through the bone, leading to greater complications and often long-term issues. The greatest treatment for this injury is to refrain from impact activities and gradually return with the assistance of physical therapy, meaning that, unfortunately, Gibson might be out for some time to allow his stress fracture to heal. Working with his physical therapist will help Gibson return in a safe manner, and the earlier phases of rehab will focus on building lower body strength in a manner that does not put excessive stress on the affected site. Efforts during early treatment sessions will focus on correcting any lower body muscle weakness and poor movement patterns that may have contributed to increased stress on the bone. Gibson may even have to be immobilized in a boot depending on the severity of the fracture, again with the intention to offload the bone and allow it time to remodel and heal. His physical therapist will gradually reintroduce weightbearing and then impact activities to allow the bone to remodel in a safe manner, and Gibson’s symptoms will help guide his progress. If he starts feeling that chief complaint discomfort, his PT will know to step back to prevent a recurrence or setback. Stress fractures take 6-8 weeks to fully resolve, but Gibson may be able to return earlier to games if his reps are limited and he has minimal pain. Radiographs (x-rays) may not always detect stress fractures or be able to track healing, but MRIs can help with determining if the bone is responding well to therapy sessions and activity modifications. Though it may be tough for the Washington Football Team to go without another one of their key playmakers, it is essential for Gibson to address this injury before it worsens so he can be 100% when the WFT plays its divisional rivals during the second half of the season.

Check out this video to see the team demonstrate a few exercises that may be included in all stages of a rehab program for a stress fracture of the tibia.