Written by Sarah Obuchowski on October 26, 2021 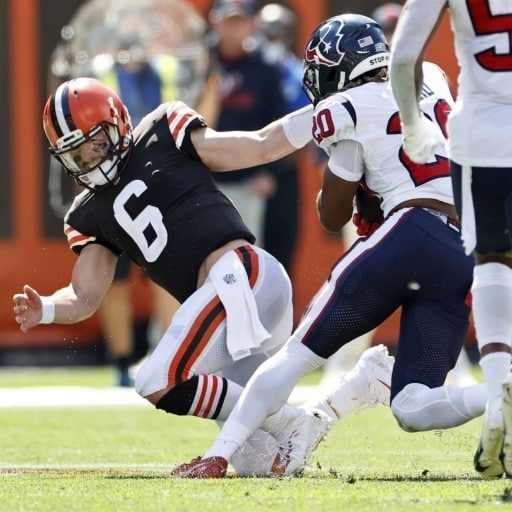 The Browns have been one of the most exciting teams to watch in recent years, largely due to the addition of their star QB, Baker Mayfield. Baker has helped the Browns make greater strides towards the postseason since he was drafted, but the Browns will have to make do without him for a few weeks at least due to a shoulder injury to his non-throwing arm. He has been dealing with a shoulder problem since the beginning of the season, when he reportedly dislocated his shoulder playing against the Texans during Week 2, and since then has been dealing with shoulder instability and multiple dislocations. It has been disclosed that Baker has been dealing with a torn labrum, but recent reports also state that Baker has sustained a fracture to his humerus, specifically the greater tubercle, where portions of the rotator cuff attach, meaning his injury has become more difficult to treat he still is to remain active on the roster. During this past week’s Thursday game, Baker did not play, but it has not yet been disclosed how many games he may be missing.

Baker certainly has a lot going on with his shoulder, but the humerus fracture coupled with the shoulder dislocation is concerning. If he returns prematurely to play, Baker may sustain further injury as he is unable to protect himself if he falls or gets hit. The fractured humerus especially could worsen if Baker’s shoulder dislocates again and will largely dictate whether he needs surgery or not. Two major muscles of the rotator cuff, the supraspinatus and infraspinatus, attach to the greater tuberosity, meaning the rotator cuff is unable to fully stabilize the shoulder with activity. Baker may not even be permitted to use those muscles to allow time for the bone to heal. Typical bone healing takes 6-8 weeks as long as everything goes as planned, and this timeline does not account for the torn labrum Baker is also dealing with, which takes about 4-6 months to rehab. Fans are hoping he is able to delay the surgery until the offseason, which could jeopardize his start for the 2022 season, not to mention jeopardize his shoulder if he sustains any additional injury during this season. His healthcare team is closely monitoring the situation and have released a statement that Baker won’t be cleared to play unless safe to do so. Regardless, physical therapy has a huge role in Baker’s return. For both fracture and labrum repair, the focus of his rehab will be stability, especially of the rotator cuff musculature, to prevent any further dislocation. In early sessions, Baker will be restricted to isometric sets (muscle fires but arm doesn’t move), allowing early muscle activation without compromising the involved sites. As time goes on, Baker will be introduced to higher level strengthening, such as weight bearing, which is an excellent way to promote strength and stability. Perturbation training (unpredictable movements applied to the arm) will also be key to ensure Baker can utilize the scapular stabilizers and maintain proper positioning of his arm, even in unexpected situations, to ensure he is able to react and protect the shoulder during games. If surgery does occur, Baker is looking at a 4-6 month recovery, which is not ideal but necessary to ensure his shoulder heals. For now, it’s up to Case Keenum to help the Browns to postseason, and if his previous experience is any indication, the Browns seem to be in capable hands.

Take a look at this video to see what a PT program for all of Mayfield’s injuries could include at the various stages of rehab.