Written by Sarah Obuchowski on November 2, 2021 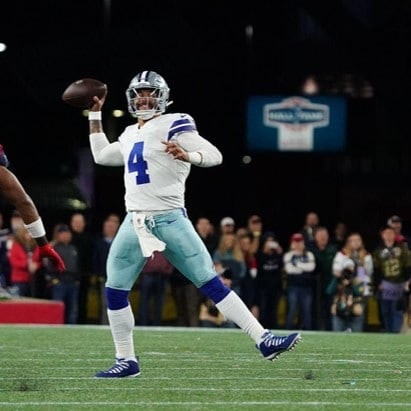 The Cowboys have been on a roll this year, whether we like it or not, and that is largely because of their quarterback, Dak Prescott. Dak has made an incredible comeback after suffering a very ugly injury to his right ankle during last season, which took surgery and months of physical therapy to rehab. Unfortunately, it is to this particular ankle that he suffered a calf strain while playing against the Patriots during Week 6. Because of Dak’s extensive injury history, it is difficult to determine how long he may be out; his return largely depends on the extent of the calf strain. Since Dak is week-to-week, it is likely he suffered a Grade I or II calf strain, in which there is mild to moderate damage to the muscle fibers but not a full thickness tear (known as a Grade III strain), which often requires surgical intervention. Dak’s return will largely depend on the strength, flexibility, and pain of the injured calf, which means he will be working very closely with his physical therapist to try to play against the Broncos in Week 9.

The calf itself is made up of two muscles: the soleus and gastrocnemius. These muscles are largely responsible for propulsion with running, and Dak needs them to be fully functioning if he wants to be a mobile quarterback. In the earlier phases of rehab, focus will be on strengthening in non-weight bearing positions to avoid putting too much stress on the healing calf. Following Dak’s injury, it may be likely that his ankle lacks some flexibility, meaning there is increased strain on the two muscles. His therapist can perform ankle mobilizations to promote improved range-of-motion of the ankle, and coupled with targeted gastroc/soleus stretch, Dak will see improved ankle excursion that will help him avoid re-aggravation of the strain. As the healing process progresses, his PT will design a program to allow him to gradually load the muscle and tendon to prevent both atrophy and overuse, as both of those outcomes can delay his recovery even more. This program will include several single leg exercises, specifically focusing on single leg calf activation via heel raises and single leg jumps, to ensure that Dak will be able to perform all required of him during the game. Once Dak can participate in treatment sessions and practice without limitations or pain, he will be able to return to play. Regardless, Dak should make it back in time for playoffs, and with how the Cowboys have been playing, it is pretty likely he will still be needed.

Take a look at this video of the West Berlin team demonstrating a few exercises for a calf strain injury during the various stages of rehab.