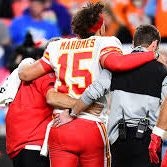 Patrick Mahomes has had a great start to his NFL career.  In just two years he’s already made a name for himself as a star quarterback – already named the NFL MVP in 2018 and even made the cover of the popular video game Madden 20 – a sure sign of NFL stardom!  So any fan of the NLF was sure to hear the news when Mahomes was injured during last week’s Thursday Night Football game. Mahomes went down early in the showdown between his Kansas City Chiefs and the Denver Broncos, as he was attempting a QB sneak for the first down.  While reaching forward, his knee collided with a defender’s knee and the impact drove Mahomes knee inward with his knee cap being forced to the outside of the joint. This is known as a dislocated patella or kneecap. A patellar dislocation can be a gruesome looking injury, but it appeared Mahomes was able to adjust his knee cap on the field and relocate it. He had an x-ray and was ruled out for the remainder of the game with a subsequent MRI the next morning. The news is the MRI results were best case scenario, but let’s check out what that could mean for him moving forward.

The kneecap is an important structure in the knee as it allows the quadriceps muscle to function properly. As you straighten your leg, the kneecap slides up which provides your leg with greater strength potential due to the physics of the movement. There are several ligaments that hold the kneecap in place along with the bony stability of the knee. The main ligament is the medial patellofemoral ligament. This is the one most likely damaged with a lateral dislocation, as was seen with Mahomes. From the MRI results we could assume the ligament was not torn, but it was still loosened from the impact of the injury. This leads to an increased risk of re-injury as the kneecap now has more available motion then it originally had. Along with more motion, less impact is needed to dislocate it – even just changing directions puts force on the ligaments of the knee.

The role of physical therapy with a dislocated knee cap is to regain range of motion of the knee as well as strength and proprioception. Often the knee will need to be immobilized for several weeks to allow the ligaments to heal in the correct position. Once this is completed your PT will begin increasing how much your knee can bend while ensuring the knee cap stays in position throughout the motion. For the average person, return to sporting activities usually takes several months. The immobilization period decreases the strength of the leg muscles so it is important to regain that strength before returning to the field. Balance and single leg stability is also important to retrain as that is an important part of most sports.

The outlook for Mahomes appears to be optimistic as they are saying it could be as soon as 3 weeks for him to return. There is still a risk of re-injury so I would imagine the Chiefs would not want to rush him back to action as his long term future is more important than a couple of November games. If he is your fantasy quarterback I would try to find a solid backup in case he is out for more than the estimated 3 weeks.