Written by Sarah Obuchowski on September 23, 2022 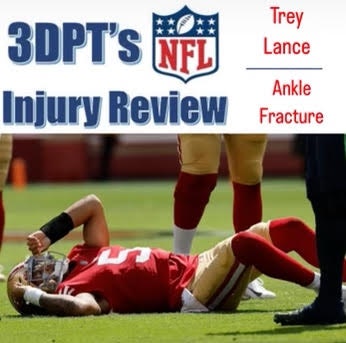 Since this past offseason, Trey Lance has been the guy for the 49ers QB position, despite the 49ers still having Jimmy G on the roster. Many speculated that Jimmy G would have gone to a different team since he lost the starting position, but after Sunday’s game against the Seahawks, Garoppolo won’t be going anywhere. Lance left the game after suffering a severe ankle injury, and reports confirm he won’t be back this season. Lance has already undergone surgery to address a fractured fibula and ligament disruption in his ankle, and he has released a statement that he intends to be back in time for the 2023 season. In the meantime, he has a lot of rehab to do.

Immediately after surgery, Lance will go through a phase of limited-to-no-weight bearing to allow the damaged tissues to heal. Ligament healing typically means the period of immobilization can last even longer. During this time, Lance will be working regularly with his PT to work on strength and mobility of the unaffected joints of the affected leg, as well as to help manage pain and swelling post-op. After about 4-6 weeks, Lance will finally start some weight bearing activity. During these early healing phases, Lance will likely be utilizing blood flow restriction training (BFRT), as this training technique allows him to gain more strength without breaking weightbearing or strength training restrictions. BFRT works by partially occluding blood flow to an extremity, which triggers specific pathways that cause the body to build muscle faster. Essentially, you feel like you did a high intensity workout without having to use much weight at all! It won’t be until 12 weeks or more that Lance will be able to start football-related drills, and this will only happen once he has minimal pain and regained full strength and flexibility. Balance and stability will also be emphasized in his rehab journey, as ligament involvement can often lead to an unsteady ankle, and targeting balance and stability can help Lance avoid re-injury down the line. As unfortunate as this injury is, Lance has plenty of time to get back on his feet and prepare for the 2023 season. In the meantime, the 49ers are lucky that they still have a quality backup in Jimmy G.

Take a look at this video to see the 3DPT team demonstrating some of the exercises that Lance may see in early, mid and late-stages of his rehab