Written by Sarah Obuchowski on November 3, 2022 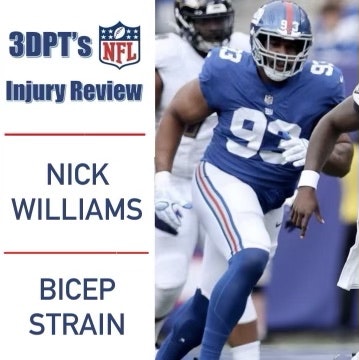 The Giants have been consistently surprising the NFC, with a winning record as we approach the halfway mark of the season. This team has seen a string of injuries this season, and this week, they have seen the loss of a defensive player this week, Nick Williams.

Williams is dealing with a bicep strain, which can pose an issue with any activity requiring elbow bending and wrist turning, which, as you can imagine, is very prominent on the defensive side of the ball. Muscle strains require varying times of recovery, depending on the extent of the damage. It is likely that Williams sustained a grade I or II strain, in which there is mild to moderate tissue damage, since he is out on a week by week basis. If it were a grade III strain, Williams would likely be out for the season since that type of strain is a complete tear of the tissue fibers. Regardless of the degree of strain, Williams is likely already working with his rehab team. The biceps brachii (or more commonly referred to as just the biceps) works at the elbow and the shoulder, so rehab will engage most of the upper extremity. William’s rehab team will take care to ensure his biceps is ready to return to play to avoid re-aggravation or worsening of injury, such as sustaining a complete biceps tear, which requires surgical correction and a much longer time in rehab. Low grade strains can take anywhere from 1 to 8 weeks to resolve, so it is unclear when Williams will be back, but hopefully in the next few weeks, he will return to help the Giants to continue to make their run.

In this video, the 3DPT demonstrates a few exercises that could be incorporated into a rehab program for bicep strain.